North America experienced a series of dangerous heatwaves during the summer of 2020, breaking records from coast to coast. In the ocean, extreme warming conditions are also becoming more frequent and intense. Two new studies from the Woods Hole Oceanographic Institution (WHOI) investigate marine heatwaves and currents at the edge of the continental shelf, which impact regional ocean circulation and marine life.

In a paper published September 17 in the Journal of Climate, WHOI oceanographers and collaborators at the GEOMAR Helmholtz Centre for Ocean Research Kiel in Germany use a new model to understand how ocean processes affect marine heatwaves at depth off the west coast of Australia. Known as “Ningaloo Niño,” these extreme warming events have caused mass die-offs of marine organisms, coral bleaching, and potentially permanent ecosystem shifts, all of which impact fisheries and the economies that depend on them.

“This area is a hotspot for increasing temperature and extreme events, with drastic impacts on regional marine species,” said lead author Svenja Ryan. “It’s important to understand where in the water column temperature and salinity changes are happening so you can determine how the ecosystem will be impacted.”

For the first time in the Southern Indian Ocean, Ryan and her co-authors, WHOI physical oceanographers Caroline Ummenhofer and Glen Gawarkiewicz, showed that the effects of marine heatwaves extend to 300 meters or more below the surface along the entire west coast of Australia. They found that during La Niña years, the southward-flowing Leeuwin Current becomes stronger and is associated with warm temperature anomalies at greater depths. These conditions were observed during the 2011 marine heatwave that led to the first-recorded coral bleaching at Ningaloo Reef, a World Heritage site, and extensive loss of a nearby kelp forest. During El Niño periods, the temperature and salinity anomalies associated with marine heatwaves are limited to the ocean surface, showing that complex ocean processes play an important role in the depth-extent of extreme events.

Ryan and her colleagues are using a similar modeling approach to study marine heatwaves in the Northwest Atlantic. “The challenge, wherever you go, is that marine heatwaves have so many drivers,” Ryan said. “Understanding different types of events and their associated depth structure is crucial for regional impact assessment and adaptation strategies, as well as for predicting potential changes in a future climate.”

A new global ocean model shows how ocean processes affect marine heatwaves at depth off the west coast of Australia. Here, a case study of a catastrophic "Ningaloo Niño" event demonstrates how a marine heatwave impacted seawater temperatures at depth during the 2011/2012 austral winter.

While models allow scientists to understand and predict changes to large-scale ocean processes, these models rely on data collected in the field. In a study published Aug. 30, 2020, in the Journal of Geophysical Research: Oceans, lead author Jacob Forsyth made use of 25 years of oceanographic data collected by the container ship (CMV) Oleander on its weekly voyages between New Jersey and Bermuda. These measurements provide valuable insight into the Mid-Atlantic Bight Shelfbreak Jet, a cool-water current that flows south along the continental shelf from Labrador to Cape Hatteras.

Forsyth, a graduate student in the MIT-WHOI Joint Program and his co-authors, Gawarkiewicz and WHOI physical oceanographer Magdalena Andres, noticed a distinct relationship between the current and changing sea temperatures. Not only does the Shelfbreak Jet change seasonally— slowing down considerably from winter to summer— they also found it had slowed by about 10 percent since data collection began in 1992. The slow-down of the jet is consistent with the long-term warming of the continental shelf.

“The Shelfbreak Jet is associated with the upwelling of nutrients, which affects the productivity of fisheries,” said Gawarkiewicz. “As marine heatwaves become more frequent, we need to understand how that links to the jet.“ 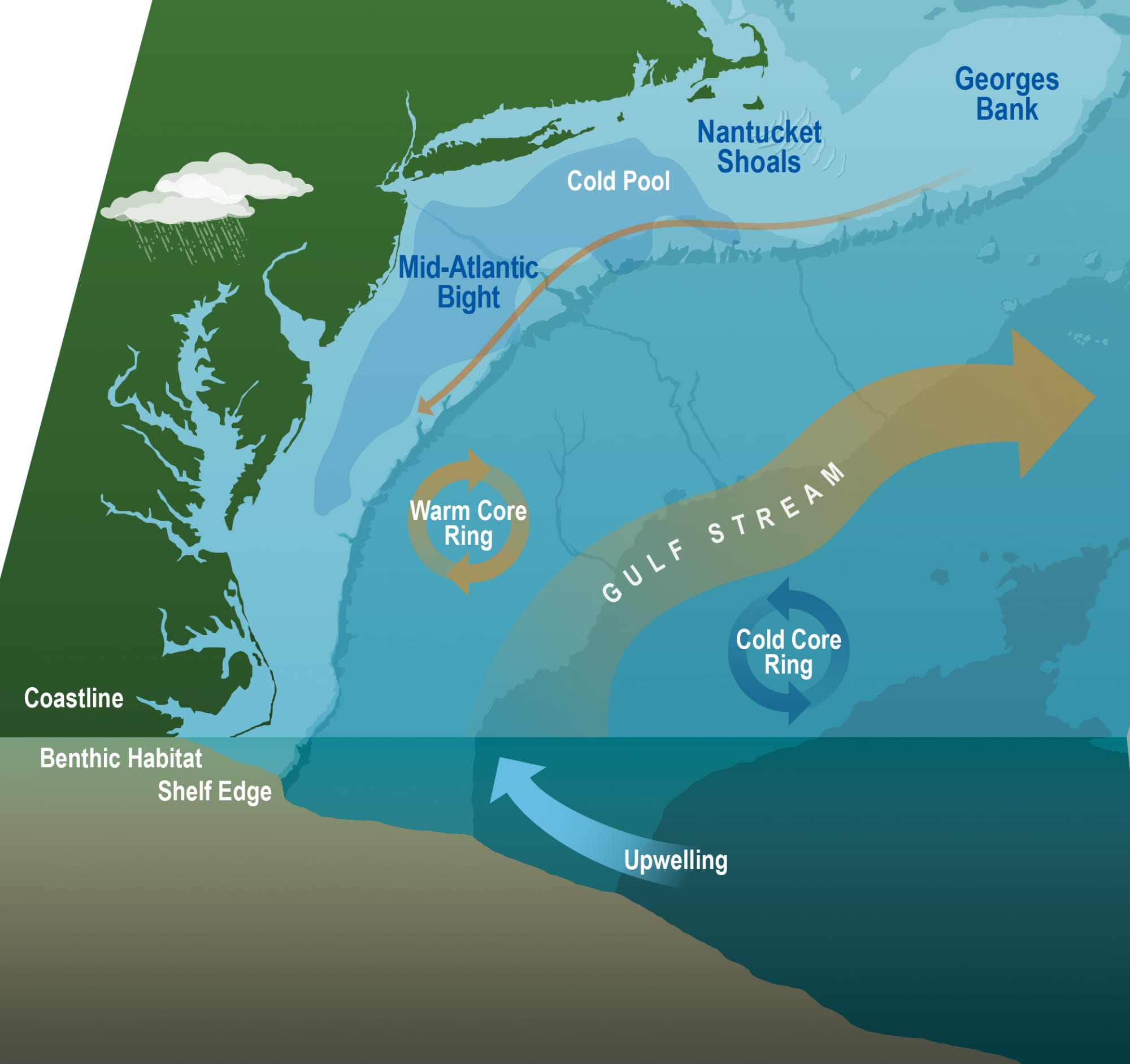 The Mid-Atlantic Bight Shelfbreak Jet, shown here as a thin orange arrow, is a cool-water current that flows south along the continental shelf from Labrador to Cape Hatteras. A WHOI study found that the current has slowed by 10% over the last 25 years, a change consistent with gradual warming of the waters on the continental shelf, and with potential implications for fisheries. Source: NOAA

Starting in 2000, researchers began to notice that eddies of warm, salty water breaking off the Gulf Stream— known as “warm core rings”— had nearly doubled in number off the New England Continental Shelf. Not only do these rings cause water temperature and salinity to increase, they push the Shelfbreak Jet towards shore, and sometimes entirely shut down or reverse the direction of its flow. The authors noted that shifting currents and temperatures on the continental shelf have already prompted changes in key New England fisheries: cold-loving lobster are slowly moving offshore, while shortfin squid are more commonly found closer to shore.

“You could call it a ‘calamari comeback’, where some of these rings are coming onto the continental shelf packed with squid. Others have none,” said Gawarkiewicz. “Jacob’s work is an important step in unraveling this mystery and helping us predict how currents and shelf temperatures will respond to approaching rings.”

The oceanographic data collected by the CMV Oleander are essential for understanding rapidly shifting dynamics in a complex system, said the co-authors. Previous studies rely on satellite data, which are limited to measurements of the ocean surface over a wide area. “Looking at the surface might not tell the whole story of what’s happening when rings approach the continental shelf, or their effects on upwelling,” said Forsyth. “This paper shows how important it is to have this type of long-term monitoring.”

This research was funded by the National Science Foundation Division of Ocean Sciences, the Office of Naval Research, the Alexander von Humboldt Foundation, the WHOI Postdoctoral Scholar program, and the James E. and Barbara V. Moltz Fellowship for Climate-Related Research. Data collection via the CMV Oleander volunteer observing ship is made possible by the continued cooperation of Bermuda Container Line/Neptune Group Ltd.

We need to draw down carbon—not just stop emitting it