On planetary change and human health: Commentary by Amy Moran-Thomas 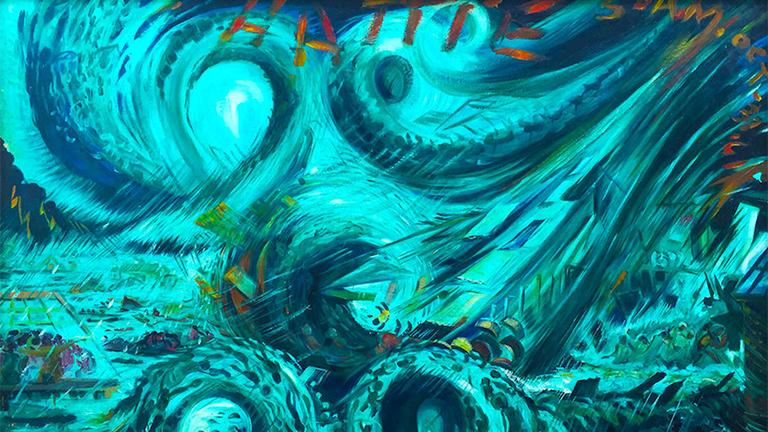 "During her research in Belize, Moran-Thomas noted that some people with diabetes, when talking about the impact of the diabetes epidemic, would invoke Hurricane Hattie (which ravaged their country in 1961) as a metaphor for the kinds of slow health changes that can suddenly erupt into a full-blown crisis. She appreciated their apt metaphor: 'In many ways,' she says, 'the chronic wear on both the planet and on people is accumulating like a gathering storm.'"

When anthropologist Amy Moran-Thomas first went to Belize to begin ethnographic research in 2008, she planned to chronicle human health concerns, focusing on diabetes. Then she learned that local diets contributing to such chronic conditions were changing in part due to losses in ocean food webs, and kept hearing stories about how local plants were in trouble.

“Listening and trying to learn from what people were saying, over the years I came to see human health and planetary health as deeply interconnected,” says Moran-Thomas, the Morrison Hayes Career Development Associate Professor of Anthropology at MIT. “When I think of health now, I think of disarray in bigger ecosystems and infrastructures that’s also landing in human bodies.”

Moran-Thomas chronicled the impacts of diabetes in her 2019 book Traveling with Sugar (now open access at MIT Libraries), but she says that story — of a global epidemic estimated to kill somewhere between 1.5 and 4.2 million people a year (a telling gap in our basic knowledge) — is just a small piece of a larger narrative.

“Changing weather makes it harder to grow food and vegetables. Fish populations dwindling also changes human nutrition. The chemicals used to stretch depleted soil or to help sick agricultural plants survive can contribute to later chronic diseases like cancer and diabetes in humans,” Moran-Thomas explains. “Clinical medicine treats cancer risk by screening our genes, but not by also monitoring our water and air that are increasingly saturated with carcinogens.”

“When I think of health now, I think of the disarray in bigger ecosystems and infrastructures that is also landing in human bodies.”

This spring, Moran-Thomas launched a new course, 21A.312/Planetary Change and Human Health, to give students a chance to explore such complex interdependencies. As the Covid-19 pandemic escalated, students read about the viral ecologies that connect human lives and animal health. In the second term of the class this fall, students discussed the implications of California’s wildfires — and Moran-Thomas added a new unit on the anthropology of mental health and climate change.

“In addition to worrying about the physical safety of going outside or whether breathing in smoke can worsen respiratory disease,” she says, “there can be such a psychic toll to wondering if you’ll need to evacuate, or looking at the sky’s strange color.”

Addressing all these interlinked problems demands an approach that does not treat people as an afterthought, Moran-Thomas says. "Climate change is not solely, or even fundamentally, a technological problem," she observes. "It’s a societal problem that requires reckoning with the role of human decisions over time and their uneven consequences for people.

There can be a tendency to counter climate denialism with more data, and I don’t think that’s what the problem is about,” she says. “Data is not wisdom; its value depends on how it is gathered, interpreted, and framed.”

As Moran-Thomas worked on Traveling with Sugar, she kept returning to Belize over time, gaining insights into slow processes of change — including for people, some of whom have lost loved ones and limbs to diabetes over the years, and for the country’s land, which has been affected by erosion and sea-level rise.

“In one spot in southern Belize where I did my first interview more than a decade ago, the whole front street and over 20 houses have gone into ocean,” she says, noting that the maintenance of bodies and infrastructures are often connected. When a road or bridge goes underwater during flooding, for example, it can have a big impact on whether people can reach the hospital during a moment of crisis or whether they can access preventative care. “Still, I’ve seen people repairing and remaking again and again. I wonder what might be possible if designers centered their insights about how health and climate erosions are entwined?”

In many ways, Moran-Thomas says, chronic wear on both the planet and on people is accumulating like a gathering storm. The painting above by Belizean artist Pen Delvin Cayetano, which also appeared in her book, depicts the effects of Hurricane Hattie, a storm that ravaged Belize in 1961; the artwork shows the souls of those who died among the waves. In Belize, Hurricane Hattie was at times used as a metaphor to talk about diabetes emergencies and losses, Moran-Thomas says, by people trying to convey how slow changes can suddenly erupt into crisis.

“It’s also a reminder how long people have been dealing with these entwined struggles around climate and health,” she says, “that many experts elsewhere are just starting to notice.” 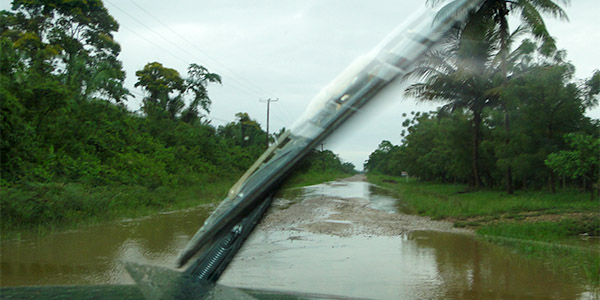 Road to the clinic in southern Belize flooded after a storm; photo by Amy Moran-Thomas

"When a road or bridge goes underwater during flooding, for example, it can have a big impact on whether people can reach the hospital during a moment of crisis or whether they can access preventative care. Still, I’ve seen people repairing and remaking again and again. I wonder what might be possible if designers centered their insights about how health and climate erosions are entwined?”

Adaptation has become an increasingly popular keyword among those working to address climate impacts, but Moran-Thomas notes these efforts could do more to learn from the insights people are trying to offer from the places most impacted already. “Whose definition of ‘adaption’ gets enacted?” Moran-Thomas asks. “For example, climate adaptation is often used in policy to mean raising buildings, a style that has been used in the Caribbean for a long time,” she said, referencing the hurricane stairs are often built so that houses can withstand flooding.

However, now that many communities and families include someone with mobility issues related to a diabetes amputation, such steep steps present their own problems. “So before state policies and insurance companies incentivize climate adaptations for homes and buildings around the world, it matters to think about what designs do that in a way that isn’t a huge setback to disability rights,” Moran-Thomas says.

“People are trying to imagine future designs that hurricane-proof houses while allowing for wheelchair access, and prosthetics that enable basic use in the ecologies where their families live, for example, walking across sand between houses. Organizations crafting policies and designs for adaptation should be listening to what impacted people are trying to share about the use issues they see.”

Co-envisioned design in such cases is especially important, she notes, given how often the unequal effects of climate change, chronic health weathering, and other racial inequities converge. “That’s why I appreciate the social perspective that starts with the questions: What work is already being done at grassroots levels that might be invisible from a distance? What visions are people cultivating, and what do they say would support that work?  What would any technology being proposed mean in local lives?” she says. 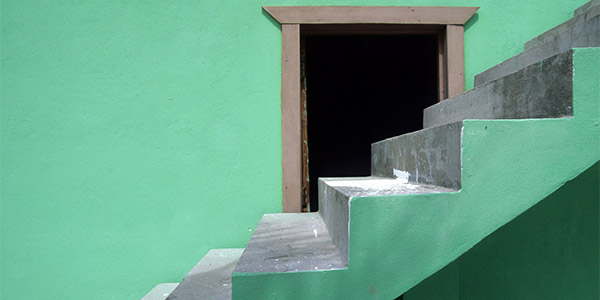 "Climate change is not solely, or even fundamentally, a technological problem. It's a societal problem that requires reckoning with the role of human decisions over time and their uneven consequences for people.”

To grapple with the societal dilemmas emerging around climate change, Moran-Thomas says anthropology can also engage impasses closer to home. Thinking with communities can be a way to shed light on why some U.S. citizens don’t see climate change as real. Borrowing an idea from Émile Durkheim, she explains: “He said science didn’t get credibility from the fact that it was true, but from the community that created it. And that people could lose faith in science if they lose that community connection.”

Community ecologies across generations are again at the heart of Moran-Thomas’ current project, which focuses on the intertwined histories of fossil fuels and social worlds linked to coal, oil, and gas legacies in her home state of Pennsylvania. With support from the 2020 Levitan Prize in the Humanities, she is exploring the legacy of the carbon economy, the notions of heritage that have arisen from it, and the region’s long histories of segregations and placemaking — which continue to influence health and politics today. 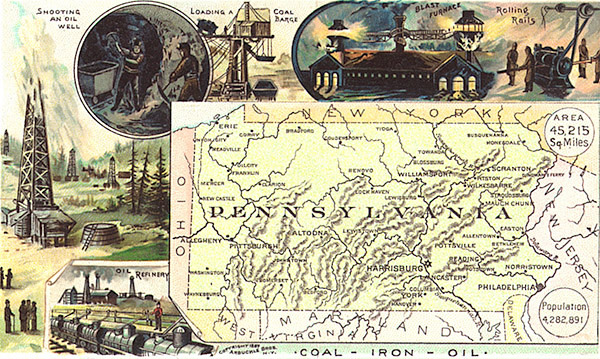 "Moran-Thomas’ current project focuses on the intertwined histories of fossil fuels and social worlds in her home state of Pennsylvania. She is exploring the legacy of the carbon economy, the notions of heritage that have arisen from it, and the region’s long histories of segregations and placemaking — which continue to influence health and politics today."

Forging a path forward will take effort from everyone, which is why Moran-Thomas is heartened by the lively conversations happening around MIT’s Climate Grand Challenges Initiative, the multidisciplinary effort to accelerate the next phase of climate research at the Institute.

A number of the presenters in recent public panels proposed ways for MIT to model ethically and socially attuned responses to climate issues. Brainstorming to build climate research communities at MIT included the idea of a new Center for Humanities, Arts, and Sciences focused on climate and society, a proposal to which Moran-Thomas contributed along with many others in MIT-SHASS. Whatever happens next, she hopes that research working towards co-envisioned responses will shed further light on the connections between planetary change and human health.

“People often forget that MIT co-founded the country’s first graduate program in public health, together with Harvard, back in 1913," she says. "Then MIT narrowed later to focus on technologies. But so much in this moment reminds us how health research can be stronger when it is transdisciplinary — when science and technologies unfold in dialogue with social input from broader publics. I hope that the growing climate health conversations around MIT can be part of reclaiming a more multi-dimensional, humanistic vision of health.” 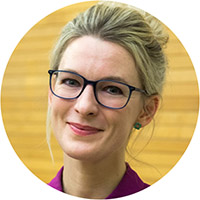 Boston Review: How a popular medical device encodes racial bias
Pulse oximeters give biased results for people with darker skin. The consequences could be serious.

MIT News: A closer look at the diabetes disaster
Moran-Thomas examines how diabetes is reaching epidemic levels in countries across the world.

21A.312 Planetary Change and Human Health
Intersections between health of the planet and the health of human beings

21A.301 Disease and Health: Culture, Society, and Ethics
From a cross cultural and global perspective, examines how medicine is practiced, with particular emphasis on biomedicine. Analyzes medical practice as a cultural system.

21A.00 Comparing Human Cultures
Explores fundamental questions about what it means to be human. How culture shapes societies and affects the way institutions work, from scientific laboratories to mega-churches. 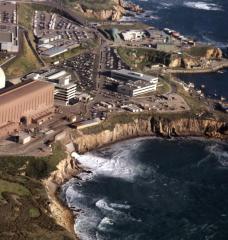 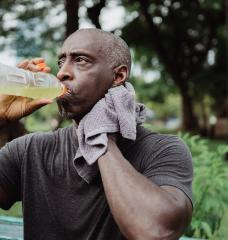